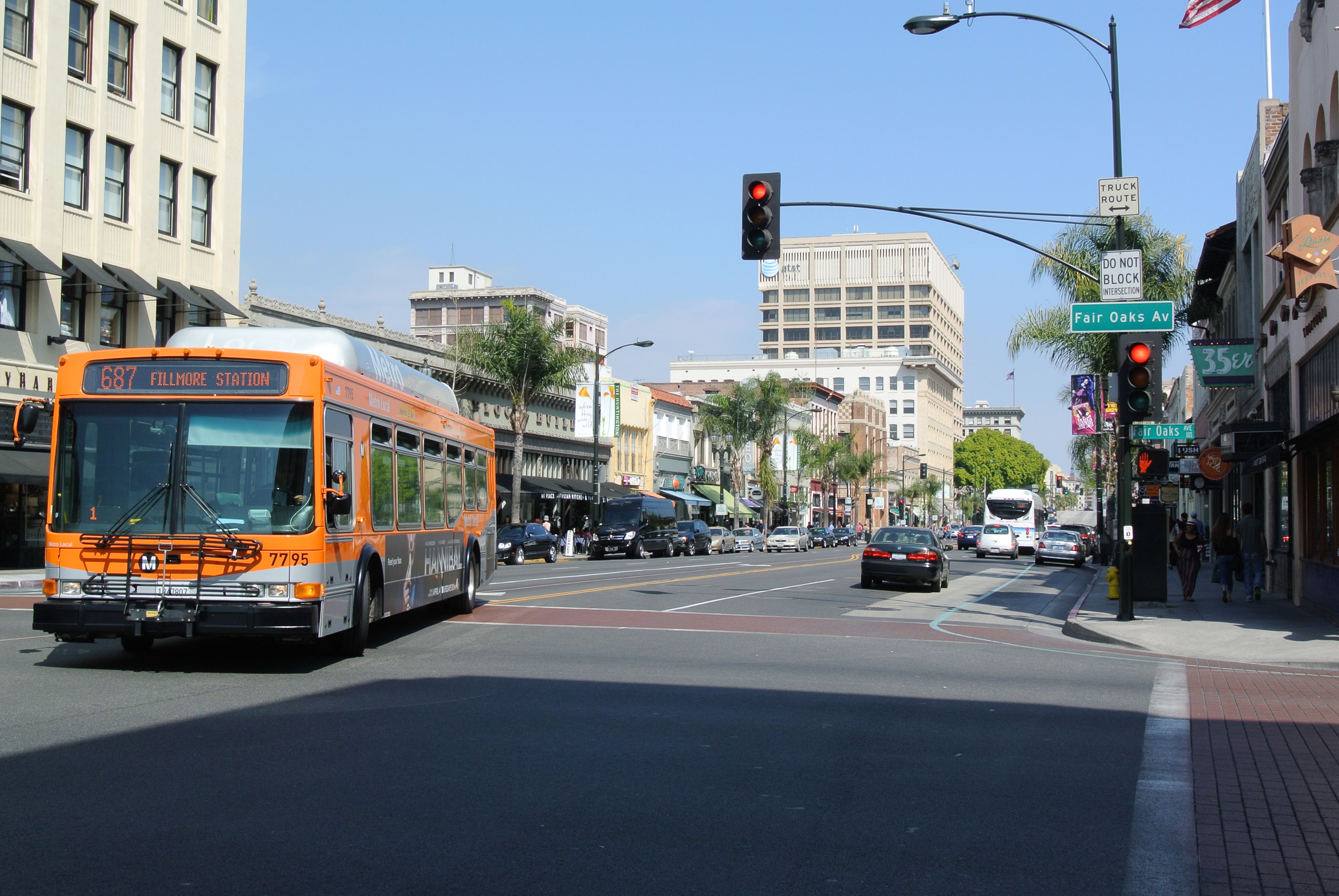 Recently, as part of my work as a consultant, I participated in a debate on a proposed Complete Streets initiative for a segment of Colorado Boulevard in Pasadena. Colorado Boulevard is a major street in the Los Angeles region, spanning about 20 miles and connecting Griffith Park in Los Angeles to the City of Monrovia. The route, once various state highways, was part of the famous US Route 66 known as the ‘Main Street of America’.

The automobile has played a central role in the development of this boulevard in the twentieth century. The influence of the car, and the culture it spawned, is reflected in the businesses lining the street and the car-driven attitude of many of the stakeholders along the corridor. Its current condition is in a sense representative of a street ‘typology’ common to many urban core thoroughfares in the US. These streets are now seeing their vocational use shift from a suburban car-driven model to a more urban and pedestrian oriented one as cores densify, mix of uses intensifies, and craving for sociability rises.

The debate pondered about how to enable this vocational shift by using Complete Streets and tactical urbanism techniques. More broadly, the conversation exposed the pros and cons of allowing this shift to happen versus preserving the status quo. Local constituents expressed concern that vehicular traffic would be redistributed throughout adjacent residential neighborhoods and that businesses along the corridor might suffer.

Colorado Boulevard exemplifies what ‘boulevards’ have come to evoke in the US and particularly in Los Angeles – a large thoroughfare devoted to a fast-moving vehicular traffic serving private parcels. Historically, however, these types of streets conveyed grandeur, formality, and civic pride. Allan Jacobs, in his seminal work Great Streets, describes how street design in the US ‘started to fall victim to a narrowly focused approach that views unencumbered vehicular traffic flow as the highest priority’ with destination and speed as the ultimate design goals.

As Jacobs reminds us, the origin of the boulevard lies in the axial planning of sixteenth-century Italian cities, particularly Rome – a model refined in Paris by Georges-Eugène Haussmann. Boulevards arrived in the US in the late nineteenth century as part of the vocabulary of the Park Movement and City Beautiful movement. Among their most important functions was that of giving structure and comprehension to the whole city as it grew and diversified under the impulse of industrialization; becoming monumental links between important destinations and, at the same time, becoming major destinations in their own right.

Jacobs identifies three urban boulevard types: a wide central median, multiway, or like in the case of Pasadena, ‘a street with a wide central roadway and broad, tree-lined sidewalks along each side’. Traditional examples of this last type are Boulevards Saint-Michel and Haussmann in Paris, characterized by gracious tree-planting, wide walkways, well-designed buildings, and often high-end addresses.

The central business district of Colorado Boulevard stretches for about a mile, or 20-minute walk end to end, with 100 feet streetscape from façade to façade. Most major Pasadena attractions are either along the street or nearby. The Rose Parade, one of the major New Year’s US TV events, passes through this section of the Boulevard. Boulevard Saint-Michel resembles this section of Colorado Boulevard, approximately 100 feet wide, with a shorter length of about 2,500 feet or a 10-minute walk. 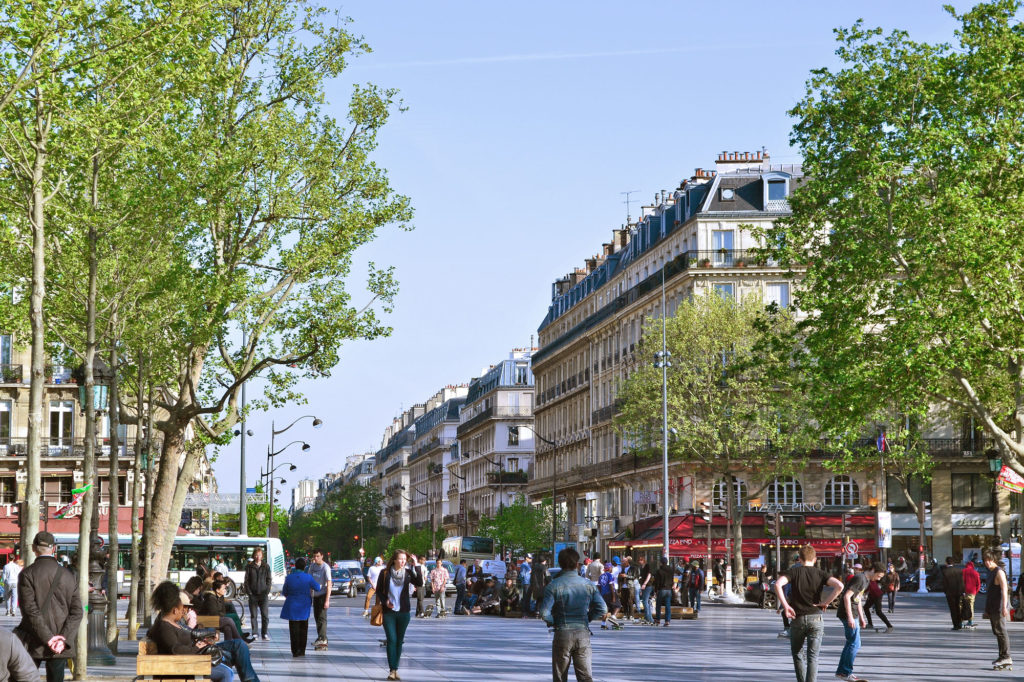 What qualities make Boulevard Saint-Michel a great street and cause Colorado Boulevard to disappoint me? There are two striking differences: the sidewalks – about 25 feet wide on each side in Paris – span only 10-12 feet in Pasadena; and the lush trees spaced about 30 feet apart in Paris are timid and sporadic along Colorado. Also, attractions along the sidewalks are plentiful in the case of Boulevard Saint-Michel while almost absent on Colorado Boulevard.

The great urban boulevards of the past were designed as delightful places to be a pedestrian; walking was the focus. They were conceived in a way to permit people to walk at varying paces, at their leisure, safe from vehicles. Trees added to the curb line and close enough to each other created spatial definition, a prominent pedestrian zone that felt safe and provided physical comfort without negating the natural environment. Alan Jacobs specifies the qualities of a great street:

But the essential purpose of a great boulevard for Jacobs is sociability. They were (and are) peopled, full of activity and life.

Planning for pedestrian environments and public spaces is still a responsibility that lies within the public domain as urban fabric is generally created and regulated by a municipality. Across the Country, there is a renewed interest in urban living, suggesting, perhaps, that we are on the verge of a City Beautiful Movement 2.0. But the present-day debate over complete streets often betrays a lack of grand vision, with emphasis on street retrofit/upgrades, hardly the civic aspirations of the past. The re-design of urban boulevards, should become a strategic opportunity for municipalities to beautify their cores, providing identity and space for sociability. In this direction, incremental approaches by means of Complete Streets and tactical urbanism techniques can jump-start a much larger public-private place-making vision, evident by highly successful recent examples on Manhattan’s streets. 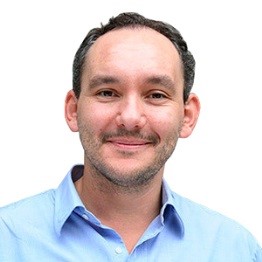 Andrea Pavia, is senior urban designer / planner at Steer Davies Gleave – Los Angeles.
Visionary yet pragmatic, his research focuses on good-resilient urban form, mobility systems, and place-making, at the intersection between city planning and urban design. He strives to apply civic-minded design principles in complex contexts. You can reach him at Andrea.Pavia@sdgworld.net