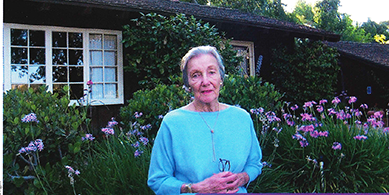 A memorial service for Margarita McCoy will be held at Cal Poly Pomona on Monday, May 16,  7-9 PM, where a scholarship fund has been established in her name.

Margarita Piel McCoy, the distinguished urban planner who was the first woman to chair a university department of urban planning in the United States and the daughter of a famed New York brewing family, died on March 31 at her long-time home in La Habra Heights, California. She was 92.

Ms. McCoy entered urban planning under challenging circumstances in the late 1960s when the profession, like architecture, was almost exclusively male and few women had a place, either in the practice or in university programs. During her 50-year career, she taught at the University of Southern California, chaired the planning department at California Polytechnic State University-Pomona, and served on planning’s accreditation committees, pressing university departments nationwide to open their doors to women and minorities.

After a quarter-century as a mother and housewife, following her husband to army bases and defense contracts across America, an unexpected divorce from an aerospace engineer left her unemployed, in debt, and out in Los Angeles, far from her extended New York family. Drawing upon a single term as an elected member of the planning board in a small Massachusetts town a decade earlier, she applied to the highly competitive planning program at the University of Southern California. She was admitted as a provisional student in 1967, at the age of 45, on the basis of a sole recommendation, from her ex-husband’s boss, the director of the Communications Satellite Laboratories, who called her with unintended irony an “exceptionally well educated woman.” An interview with the program’s director Alan Kreditor also persuaded him to take a chance.

Through night classes with teenagers at local high schools to gain the math skills she lacked as a college English major, Ms. McCoy mastered the statistics needed for coursework, internship, and independent field research, completing the Master’s degree and earning professional certification in 1970. Upon graduation, she stayed on at USC as program administrator, advising students.

Although admitted into USC’s doctoral program in 1975, Ms. McCoy deferred to accept a professorship in the Department of Urban Planning at California Polytechnic State University-Pomona, then a brand-new program struggling to raise the skills of its many first-generation students to compete with graduates from the established, world-class departments at USC and UCLA. During her fifteen years as professor and seven years as chair at Cal Poly (1977-83), she insisted on excellence as the way to raise the program’s ranking and launch the careers of its many blue-collar working students. She also taught a full load, not only her specialty planning theory but every course unfunded by tight state budgets, correcting the grammar and checking for plagiarism in every one of the hundreds of essays she required of students each quarter. Through research, she also led her department to the forefront of critical statewide issues, chairing a citizens’ review committee that blocked a costly corporate people mover for downtown Los Angeles and developing a plan for managingthe California coastline.

Midst these demands on her time, Ms. McCoy was also active in professional associations, working to widen the space for women in planning. She was a commissioner on the American Institute of Certified Planners (1979-82,1990-94) and was elected to a term as its president (1981-82). She also served as a director (1979-82) of the American Planning Association (APA), and was a founder of its Planning and Women Division. As a member of the Planning Accreditation Board and the Association of Collegiate Schools of Planning (ACSP), she inspected many of the nation’s planning schools, pressing often-reluctant faculty for affirmative action plans to advance women and minorities.

By the time she retired from Cal Poly in 1989 at age 66, her revitalized program, then one of the largest in the United States, had won a national reputation, said the APA’s professional journal, “for producing the best technical planners in the Los Angeles area.” By then, three of the eight professors in her department were women, close to parity. Though formally retired, she spent a decade in private practice, advising communities across Southern California on general plans that would balance growth and preservation while preparing for the fire and earthquakes that are natural facts of life in that region.

After retiring a second time, she served nine years on the planning commission of her adopted home, La Habra Heights, working to balance the relentless development at that northern end of Orange County with nature preservation. Through 300 hundred public hearings, she opened the process for the city’s general plan far beyond what she called “these little cabals of real estate people and government” that often decided development in Southern California, thereby winning wide public support for controls on growth. She was particularly determined to protect an unspoiled patch of California meadows in the city’s steep hills at Powder Canyon, where deer and coyote somehow survived, and link it, via wildlife corridors, to other natural areas along the region’s mesquite-covered ridgelines of sufficient size to sustain animal habitats, even in the middle of the Los Angeles. When she could no longer inspect every building application by hiking down ravines or through construction sites—compass, architect’s plans, and tape measure in hand—she retired for a third time in 2012, just a few days before her 89th birthday. Late in life, she delighted in reports from friends and family that Powder Canyon’s trails were busy with hikers, dog walkers, mountain bikers, and even horse riders.

By then as well, the tributes were flowing. In 2003, the California chapter of the American Planning Association (APA) honored her as a “name synonymous with service to the planning profession,” and two years later gave her its Contribution to Women Award. A year later, the APA’s national board selected her, then 82, for its National Women in Planning Award, citing her “career opening the door for many women planners” and her “important contributions to planning education throughout the country.” A colleague called her “a force in Southern California,” adding she “made a mark in the landscape of California.” In 2008, her alma mater USC corrected that provisional admission to its graduate school by giving her the Guardian Award “for alumni merit.” Not only did she win awards, but she has one named in her honor. In 1995, the Association of Collegiate Schools of Planning established the Margarita McCoy Award, still given biannually to those who make “an outstanding contribution toward the advancement of women in planning.”

Ms. McCoy was born in New York City in 1923 to parents who were both descendants of the city’s tight circle of German-American brewers. Her mother’s family had established the Central Park Brewery on Manhattan’s 59th Street, at the present site of Bloomingdale’s Department Store, while her father worked at his family’s Piel Bros. brewery out in the East New York section of Brooklyn. After that brewery was sold in 1962, the Piel family invested the proceeds in a closely held mutual fund, M. & G. Piel Securities, and Ms. McCoy later chaired that firm for nearly twenty years, succeeding her cousin Gerard Piel, the publisher of Scientific American magazine. She was educated at the Garden City schools in nearby Long Island, graduating high school in 1940. After attending Wells College and Northwestern University, she finished her BA in English at Boston University in 1944. By then she was married to Alfred McCoy, Jr., a West Point graduate, and followed him to army bases in North Carolina, Texas, and Oklahoma where he trained for combat in World War II and Korea.

Her planning career started accidentally when, while living in Massachusetts where her husband was then an electronics engineer, the local League of Women Voters sent her to observe the planning board in her town of Sudbury. Deciding it “interesting but being done all wrong,” she ran for the board in 1959, was barely elected, and found herself caught up in the politics of an old New England village at the cusp of rapid suburban development. By auditing the newly created courses in planning at Harvard and MIT, she gained the skills to network with neighboring towns along the Concord and Sudbury rivers in a then pioneering program of wetlands protection. Just when that success was leading to a career, her husband’s move to California for work in communications satellites forced her to put those plans on hold for another decade.

She is survived by two children, Alfred McCoy of Madison, Wisconsin, and Lady Margarita Ground of Derbyshire, England; four grandchildren; and two great-grandchildren.