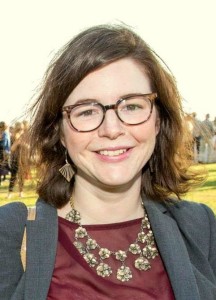 Our new APA Los Angeles section director for 2016-2017 is Ashley Atkinson, who has lived in Los Angeles since 2004 and served on our Board since 2011.

As Planning & Housing Specialist in Mayor Eric Garcetti’s Office of Economic Development, Ashley liaises with the departments of City Planning, Housing, and Building & Safety to implement mayoral directives and achieve priority outcomes on land use, housing, and development issues.

Prior to joining Mayor Garcetti’s office in 2013, Ashley was a Senior Analyst with the City of Long Beach’s Department of Development Services, where she supported the former Long Beach Redevelopment Agency through financial analysis and project management.

Ashley received dual Master’s degrees in Public Administration and Planning from the University of Southern California. In addition to serving APA Los Angeles, she is an active member of the Urban Land Institute.

We caught up with our new Section Director!  Here’s what she had to say:

What brought you into planning?

I actually have a pretty good story. When I was a little kid, there was this old white mansion on the way to the church my family went to. I thought it was beautiful, and it was empty. I loved that house and I wondered for years why no one wanted to live in it. At the time I didn’t know anything about poverty, the economy, or white flight to suburbia.

The church that we went to was in an older part of the city that was, at one point, a wealthy first-wave suburb. The neighborhood had obviously changed since then and the house was vacant and falling apart. I always wondered why it was that way, but had no understanding whatsoever for years and years. It wasn’t until I got to college that I became aware of the fact that these are not things that just happened — they were the result of decisions made by people who live in communities, people in government, and people who invest in places. I was about halfway through college when I learned about urban planning, but as soon as I did, I realized it was the thing I’d been thinking about my whole life — I just didn’t know it had a name. It was a little too late to switch my major from journalism, so I minored in public policy and went back to grad school for planning and public administration.

How did you end up in LA?

I grew up in Virginia, did my undergrad at the University of North Carolina, went to Japan to teach English for two years, and then came here for grad school at USC. LA was not a place I ever dreamed I’d end up — I shared most East Coasters’ perception that it was a polluted, superficial and dangerous place — but I wanted to study in a big city and USC’s program was a great fit for me. I fell in love with it pretty quickly and I still don’t see myself leaving anytime soon!

Tell us about a good book for planners!

Happy City by Charles Montgomery. I’m really interested in the science of happiness so I was excited to read it, but I didn’t realize how much it is about mobility and transportation. The focus is on how our movement through the city actually makes us happier. It discusses the planning choices that we’ve made in the last 50-70 years and how they’ve affected our happiness, mostly through changing or limiting our mobility.

What’s your focus for the next two years as Section Director?

As a Section we have to address all the diversity that planning in LA encompasses. We need to bridge different disciplines of planning, bridge different geographic areas in LA, different sizes of agencies, and different types of work because there are so many of us. There are 1,300 members in our Section. There are probably more planners working in LA County, and then beyond that there’s the 14 million people that live here.

Our Section needs to organize programs and address issues that touch on all those facets. We need to convene people in spaces where they might not normally be able to come together, and might not have a chance to have conversations, with planners from other disciplines and other geographic areas. That’s something that is really important for us.

My other goal is to elevate the organization as a voice for planning and for planners in LA. There are a lot of organizations with slightly different memberships, and slightly different focuses.  For some number of years, APA has not been the first organization that people think of when they think about planning. But because we have such a strength and wealth of knowledge in our membership, I want us to be more of the leaders in the planning conversation — both for industry insiders and for people who don’t know what planning is and don’t understand how it impacts the City.

Who do you see as a mentor?

I’ve had a couple of really good bosses, to whom I’m grateful for being knowledgeable and committed people with the best interests of the community at heart. They were people who were willing to share opportunities, doing great things for the city but also happy to take younger planners along for the ride. When I was in grad school I had an internship with Donald Spivack, who is someone a lot of people know. He’s retired now, but he worked for LA’s Community Redevelopment Agency for many years, and had many interns — probably all of them would say the same thing, that it was a very valuable experience! He brought us with him everywhere, gave us an endless amount of work to do, and was not at all stingy with his knowledge and his time, even though there were probably five of us at one. It was one of the more valuable experiences that I had early in my career.

Why do you love Los Angeles?

There is a lot of room here. There is room for everyone.

When my friends back East ask me why I’m still in LA, I say it’s because you can live whatever life you chose to live here. If you want to be with the celebrities, if you want to have an urban life downtown, if you want to be suburban in Pasadena, or whatever you want to do or experience, it’s here. It’s really about choosing your own lifestyle. People with fewer means have fewer choices in that regard, but LA has always been a bit of a blank slate, and I think it will continue to be a place where you can craft your own experience and your own destiny. I have a lot of friends whose parents moved here as immigrants with very few means and their children are now doctors, college educated people — this is possible in Los Angeles.

The politics here are always going to be an issue. LA has a very complicated government structure, and the 87 other cities and the County make it extremely complicated. But that also makes it a very innovative region, where one city is doing something no other city is, and setting an example for others who will pick it up later. It’s hard to get things done at a regional level, but the competition and partnership between individual cities leads to new things.

What’s your hope for the future of planning in LA?

I hope that every neighborhood will be a better version of itself, and better connected to other places. So that people might want to visit other places, but people will also have more reasons to stay in their own neighborhoods unless they want to go to that interesting thing 15 miles away, whether it’s the beach or the mountains or LACMA.

Have more questions for Ashley?

Homelessness is a Manmade Disaster

More and Better: Increasing Diversity, Equity, and Inclusion in Planning

Vote now for our 2021 Board of Directors!