“The event demonstrated that any viable action on global issues like climate change must come from people working together at the local level…. Let us continue to communicate and organize.”

On Saturday, April 14th, urban planning and design practitioners, academics, students, and community members gathered at All Saints Episcopal Church in Pasadena to attend Just Say Oui!, a climate change summit hosted by the Southern California Planning Congress, the Los Angeles Section of the American Planning Association, the American Society of Landscape Architects, the Association of Environmental Professionals, and All Saints Church in cooperation with non-profits and other professional organizations. The event’s primary purpose was to encourage networking among professionals to develop local solutions that implement the 2015 Paris Climate Change Accords (officially named the Paris Agreement under the United Nations Framework Convention on Climate Change). The international treaty was signed by all UN members—with the exception of the United States—to reduce global greenhouse gas emissions. 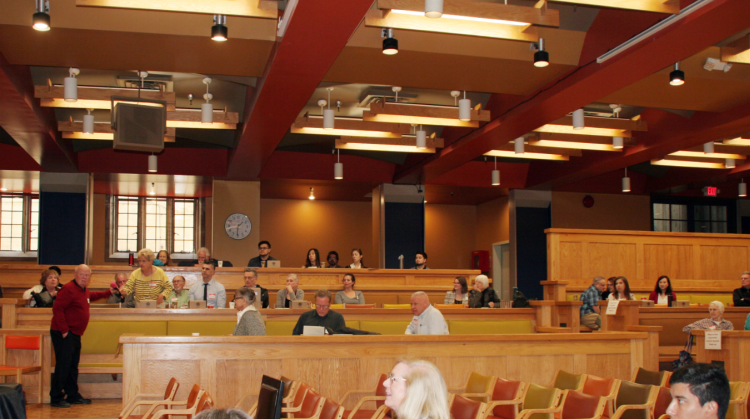 The Master of Ceremonies for the April 14th gathering was Cal Poly Pomona professor Jerry Mitchell, JD, PhD, who teaches courses on sustainability in the Department of Urban and Regional Planning. The morning began with a welcome from Pasadena Mayor Terry Tornek, then a keynote, inspirational talk by All Saint’s rector, Reverend Mike Kinman. He emphasized the notion of ‘having enough’ and our collective, ethical responsibility for the future of our Blue Planet. Two panels of speakers followed. The first, “Big Picture/Big Sky,” was moderated by former Pasadena mayor, Bill Bogaard.  Speakers included John Heilman, Mayor of West Hollywood and member of the national pro-Paris Accords Climate Mayors group, JPL and UCLA Climatologist Dr. Bill Paetzert, and Michelle Boehm, Executive Director of California’s High Speed Rail Authority. The group emphasized the need for collective solutions across agencies to reduce climate change. A second panel, moderated by Pasadena Planning Commissioner Felicia Williams, looked at “Climate Change at the Ground Level.” Speakers included architect, Mark Gangi, who won international accolades for his Museum of Water + Life, landscape architect Claire Latane, and Claire Robinson, founder and executive director of Amigos de los Rios, creator of Southern California’s Emerald Necklace—a network of parks and open space that encourages non-auto use. 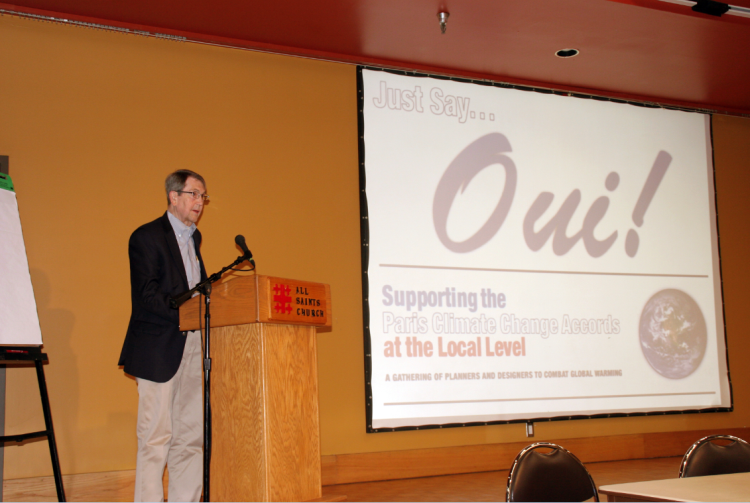 Architect and urbanist Stefanos Polyzoides, the co-founder of the New Urbanist movement and co-author of The Awahnee Principles for Resource-Efficient Communities, delivered the event’s keynote address. Polyzoides criticized current architectural and planning practice as being too wedded to financial interests, inaccessible to and disconnected from ordinary people, and producing developments that invoke NIMBYism. Instead he presented his vision for a new paradigm for urban design and development in which architects design fewer eye-catching, iconic buildings and return to buildings in line with the real needs of local communities and regions. He also called upon planners to turn away from business-as-usual city planning and adopt form-based codes as a way to promote healthy, walkable, place-sensitive communities that reduce automobile use, displacement, and neighborhood tension due to mismatched, inappropriate building types. In this way, urban development could become a force for positive action against climate change.

Next, Kristina von Hoffman, Director of Outreach at Climate Resolve’s Path to Positive LA, conducted a workshop on how planners and climate activists should discuss climate change when interacting with the public. She detailed the difficulties of generating action on a complex issue like climate change, especially when major media outlets lack any substantive discussion of the topic. She also cautioned against planners’ tendency to over-rely upon facts, figures, and symbols, referencing Al Gore’s emphasis on the polar bear in his well-known film, An Inconvenient Truth, which has little relevance for most of the public’s daily lives. Instead, she encouraged attendees to use storytelling in their advocacy efforts, which allows people to connect their experiences to the larger goal of climate change action. Dr. John Lloyd, a professor of history at Cal Poly Pomona and member of Pasadena’s Complete Streets Coalition followed, with a short “TED”-style talk. He provided his personal story about how he has reduced his car trips by relying on local transit and bike riding, providing tips he learned for navigating auto-oriented streets on a bicycle.

A hands-on workshop based on Paul Hawken’s Drawdown: The Most Comprehensive Plan Ever Proposed to Reverse Global Warming, concluded the day’s events. Hawken outlines 100 climate action resolutions that will result in “drawdown,” the moment that greenhouse gas emissions start to decrease on an annual basis rather than increase. Student-volunteers from local universities facilitated the small-group discussions and brainstorming sessions. The topics for each group came from the top 10 Drawdown resolutions which, if implemented, would collectively reduce 80% of greenhouse gas emissions. These included management of refrigerant chemicals, education for girls worldwide, family planning, plant-based diets, solar power, and use of wind turbines. Each group drafted a series of climate change action resolutions based on their topic.

The event demonstrated that any viable action on global issues like climate change must come from people working together at the local level. Eleanor Roosevelt implored the world to take action “in small places close to home” because it is in these places that action ultimately begins. In their role in facilitating and guiding local actions, planners may have the most impact not only in local jurisdictions but also on a national and international scale. Through the gathering of students, professionals, and stakeholders from a variety of fields, futures summits—like Just Say Oui!—have the potential to spread awareness and inspire action in the field of planning, environmental design, and beyond. Let us continue to communicate and organize.

Ryan Shepard is an undergraduate student studying Urban and Regional Planning at California State Polytechnic University, Pomona. He is passionate about climate resiliency, environmental justice, and public health. He currently interns in the private sector drafting hazard mitigation plans. His senior thesis, “How the Other Half Rides,” explores the unique obstacles women face when using public transit facilities. He thanks his professor, Dr. Julianna Delgado, AICP and President of the Southern California Planning Congress, who developed and lead the organizing of the Just Say Oui! summit, for her help in writing this article.