My Love for Los Angeles: The Reason Why I am Voting “No on Measure S” and Voting “Yes on Measure H”

Editor’s note: The American Planning Association Los Angeles Section has not taken a formal position on Measure H, and the opinion expressed is the author’s. 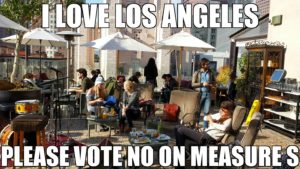 “Planning is thinking beforehand how something is to be made or done, and mixing imagination with the product – which in a broad sense makes all of us planners. The only difference is that some people get a license to get paid for thinking and the rest of us just contribute our good thoughts to our fellow man.” – Paul Revere William, FAIA

Los Angeles is either a city you love or a place you hate.  If you love it, you recognize Los Angeles as a beautiful, evocative paradox and as a highly performative metropolis that is constantly evolving.  Some people, granted, are set in their ways; change to them is a rusty blade that they’re too afraid to touch.  But most of us, like pollinators buzzing around mountain sage, thrive on the beautiful complexity that is constantly in bloom.

And as Father John Misty says in Pure Comedy, “Each Other’s All We Got.”

If you didn’t really love, truly love, Los Angeles you’d be long gone by now.  It’s an incredibly challenging place and that is the thread that unites our fate: an attraction to and a passion for a lifelong entanglement with that challenge.  It is a puzzle.  It is a love affair. It is a relationship that pulls us in deep, holds us together tight and rewards our lives with a lifelong journey of yearning and delight.

As to the future of Los Angeles, our upcoming election on March 7th is a giant, sky-high silver fork in the road that is about to get struck by lightning.  We are at a genuine cross road and we get to choose which direction to go.

I am voting Yes on Measure H because we have a genuine and profound housing crisis on our hands.  We need to build more housing for all and we need to fund more resources to provide, with dignity and grace, the services for those of us in the region that need additional emotional, mental, and physical support. Due to a general lack of funding in urban design, our built environment is stressful and we need to recognize its burden and ameliorate our suffering to find ways to sustain a human empowered network of resources to elevate the human spirit.

To vote Yes on Measure H is an affirmation that you believe in Los Angeles and will do all that you can to help your fellow neighbor.

Now, Measure S on the other hand is much less of an affirmation of kindness.  Some may even argue that it is retaliation against our current political elite, as well as, an attempt to further isolate those of us who were not fortunate enough to live in or move to California before the primal inequities of Prop U (1986) and Prop 13 (1978) were put in place. Measure S is a complicated beast.

Well, whichever direction you select to vote, it’s my job to share with you that a Yes on S vote is a sledgehammer that cracks the noses of us pollinators.  It kills the mountain sage dead and exterminates our ability to thrive. However, though, the No on S vote is a catalytic declaration to recommit ourselves to planning ahead and to build the city that will embrace us all and allow a few million more people to call Los Angeles their home. Yes, I said a few million more! In my opinion, due to climatic, geo-political and cultural shifts, millions more will want to call LA home over the course of the next hundred years.

To Vote No on Measure S is to vote Yes on LA and its future.  It is a vote about tomorrow and our compassion for our fellow humans roaming this planet in search of a home to call their own.

You can find more reasons why I am voting “No on Measure S” and voting “Yes on Measure H” here.

#FutureLA is alive and strong. 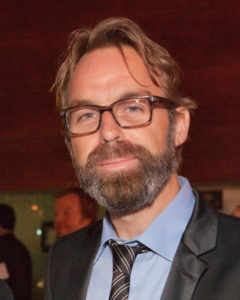