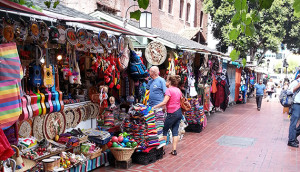 As part of National Community Planning Month, APA’s Great Places in America program recognizes streets, neighborhoods, and public spaces in the United States demonstrating exceptional character, quality, and planning—attributes that enrich communities, facilitate economic growth, and inspire others around the country. The Great Neighborhoods, Great Streets, and Great Public Spaces of 2015 are places that are unique and exemplary in their amenities and infrastructure, cultural identity, and use of sustainable and innovative practices.

“This year’s list highlights the power of a single well planned street to stimulate economic activity and energize an entire community,” said Carol Rhea, FAICP, president of APA. “We applaud those who have worked hard through careful planning, public engagement, and innovation to build better places to live, work, play, and visit—one street at a time.”

Since launching the Great Places in America program in 2007, APA has recognized 245 neighborhoods, streets, and public spaces around the country. Places are selected annually and represent the gold standard in terms of having a true sense of place, cultural and historical interest, community involvement, and a vision for the future.

For the second year in a row, members of the public will have the opportunity to suggest an additional favorite public space, neighborhood, or street to earn a “People’s Choice” designation. During the first half of October, individuals can offer suggestions via APA’s social media channels, using the hashtag #greatplaces. APA will then select five finalists, after which the public can visit APA’s website to vote for a favorite. APA will announce the “People’s Choice” winner in early November 2015 and promote the winner on the APA website and through social media outlets, as well as host a local celebration. 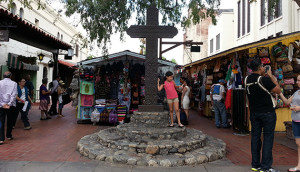 A small pedestrian path lined with shops and food stalls, Olvera Street is located in one of the oldest sections of Los Angeles and an emblem of the city’s diverse cultural heritage. Originally a Mexican farming and ranching community centered in Los Angeles, Olvera Street and its adjacent plaza gradually became neglected. In 1930, Olvera Street was renovated and reopened as a Mexican marketplace and symbolic birthplace of the city. The City of Los Angeles has continued to work at preserving Olvera Street through careful planning, zoning, and classification of the street as a historic resource. Ongoing preservation funding continues the efforts of restoring the surrounding area and supporting the small businesses on the street. Olvera Street represents a core part of the El Pueblo de Los Angeles Historic Monument, which is listed on the National Register of Historic Places. The street hosts a number of cultural events, including the annual Blessing of the Animals, Dia de los Muertos, and Cinco de Mayo celebration. To learn more, click here.

The five blocks of Jacksonville’s Laura Street are a center of activity in the city featuring a diversity of restaurants, shopping, events, and cultural destinations, including the four-story Jacksonville Public Library, the Museum of Contemporary Art, and Jacksonville City Hall. With demarcated crosswalks for safety and a Skyway monorail stop, Laura Street was designed with pedestrians and accessibility in mind. A $2.3 million improvement plan completed in 2011 expanded sidewalk space, installed shade trees with color lighting, added traffic calming measures, and incorporated a host of other pedestrian-friendly upgrades to the street. The Laura Street Façade Grant Program provided incentives to building owners and operators to upgrade building fronts and add outdoor seating, landscaping, and murals. Some of Laura Street’s regular events include the First Wednesday Art Walk, Jaxson’s Night Market, GastroFest, the Vagabond Flea, and the annual five-day One Spark festival. To learn more, click here.

Dayton, Ohio’s, Fifth Street, stretching a quarter mile in the center of the city’s historic Oregon District, is a multi-modal corridor with bike share stations, bus service, pedestrian-focused design, and an array of locally owned businesses among the street’s restored historic buildings. The area was slated for a large-scale urban renewal project that would have removed the historic homes and buildings, but a public-driven campaign sought to preserve the historic significance of the street and concentrate instead on revitalization and restoration. Fifth Street today features a span of rehabilitated 19th and 20th century commercial buildings and some of the Oregon District’s signature character features, such as ornamental lighting, stamped concrete crosswalks, and landscaped sidewalks. The street is home to the monthly First Friday celebration, a free community event highlighting local art and entertainment, as well as Hauntfest, Taste of the Oregon District, and a variety of other events, nightlife, and attractions. To learn more, click here.

Spanning six blocks in downtown McMinnville, Oregon, Third Street features shops, restaurants, and a pedestrian-friendly design making it a destination street for both locals and visitors. Implementation of the city’s 2000 Downtown Improvement Plan and 2005 Third Street Streetscape Plan created a complete street through improved pedestrian infrastructure, greenery, traffic calming measures, and better lighting that set Third Street apart from neighboring parts of McMinnville. Third Street hosts a number of community events and activities, including brown bag concerts, the McMinnville Farmer’s Market, Third Saturday Art and Wine Walks, and tours of the street’s historic buildings, several of which are on the National Register of Historic Places. Third Street buildings such as the McMenamins Hotel Oregon, built in 1905, have been converted to modern uses and add to the small-town character of the street. To learn more, click here.

Lexington Avenue, the creative epicenter of Asheville, North Carolina, features a diverse mix of more than 200 small shops and businesses—including two modern-day speakeasies and a variety of independent stores and restaurants—and a pedestrian-centered atmosphere with brick sidewalks and a heavy tree canopy. Once a neglected stretch of buildings proposed for redevelopment into a mall, Lexington Avenue instead became an economically thriving thoroughfare as a lively music and arts scene emerged, drawing visitors and tourism profits to the area and giving the street an eclectic, unique character. Recent city planning has emphasized and incentivized adaptive reuse and infill development, further increasing density and activity on Lexington Avenue. The annual Lexington Avenue Arts and Fun Festival and the Downtown After 5 Summer Music Series, along with the abundance of cultural and commercial destinations filling the street, play a crucial role in energizing and maintaining Asheville’s economy. To learn more, click here.

For more information about these streets, as well as APA’s top four Great Neighborhoods and top six Great Public Spaces for 2015 and previous years, visit www.planning.org/greatplaces.

The American Planning Association is an independent, not- for-profit educational organization that provides leadership in the development of vital communities. APA and its professional institute, the American Institute of Certified Planners, are dedicated to advancing the art, science and profession of good planning — physical, economic and social — so as to create communities that offer better choices for where and how people work and live. Members of APA help create communities of lasting value and encourage civic leaders, business interests and citizens to play a meaningful role in creating communities that enrich people’s lives. APA has offices in Washington, D.C., and Chicago. For more information, visit www.planning.org.