On May 2nd, 2015, Max Podemski of Pacoima Beautiful hosted APA Los Angeles members and their guests for the tour of various projects in the neighborhood of Pacoima in the San Fernando Valley.  The group convened at Pacoima City Hall, where Max handed out maps of the stops we would make along the tour.

The group convened at the striking modern Pacoima City Hall complex, the seat of Felipe Fuentes, the Councilmember of the Seventh District, and home to various community organizations, including Pacoima Beautiful. Since 1996 the organization has been working on social and environmental justice issues with a focus on public service and community development. Pacoima Beautiful is currently focusing on three planning initiatives: Clean up Green Up, Complete Streets, and the Pacoima Wash Vision Plan. The latter plan was funded by the LA County Department of Public Health and has MLA (Mia Lehrer and Associates) as its lead landscape architect. Read more about it here.

While so much has been done or is under way, much work remains in this neighborhood, which has been underserved for many decades. Our group got a tour of projects that were recently completed, the projects in in progress, and those planned for the future.

Our first stop was the Haddon Avenue Bridge on the border between San Fernando and Pacoima. It is the only pedestrian bridge over the  Wash in Pacoima, and until recently, it was practically unusable. The bridge provides a great vantage point for the vast serpentine of concrete flood control channel with just a thin sliver of water flowing through it. The Pacoima Wash Vision Plan calls for the creation of a recreational zone on a long stretch of the river, smaller in scope, but similar in function to the plans for the LA River.

The Wash Natural Park was once an empty lot famous for being a place where construction debris and trash was dumped. The lot was recently turned into a beautiful park space with drought-tolerant, California native plants thanks to funding by the Mountains Recreation and Conservation Authority (MRCA) and a grant from the California Department of Water Resources. The park is laid out with a series of circular plazas linked by walking paths flanked by vegetation on all sides. The park serves as a rainwater collector that channels the water into the ground, rather than back into the ocean. Already, the park serves as a tranquil respite from the polluted, vegetation-poor neighborhood surrounding it. Read more about the park here.

The great view from the LA Mission College exposes the northern frontier of the San Fernando Valley, where the Pacoima Reservoir is held by the Pacoima Dam, and the Pacoima Wash begins. The vast valley that opens below reveals the immense potential of the Pacoima wash to become a natural wonder, and an invaluable recreational zone during times when the drought is over.

Our next stop was the Bradley Avenue Plaza, a pedestrian space for the community, made possible by a partnership between the Los Angeles Department of Transpiration’s People Street Program and Pacoima Beautiful. The plaza links Van Nuys Boulevard, the main thoroughfare of Pacoima, to the San Fernando Gardens , one of the largest public housing projects in Southern California. The plaza just opened to the public and despite not yet being furnished, is already being used by the neighborhood. When we arrived at the plaza we greeted by the wonderful sounds of a Tia Chucha’s band. The plaza recently received full funding through a Kickstarter campaign, and should be fully furnished in the coming weeks. Stay tuned for eclectic programming!

At the end of our tour Max led us down Van Nuys Boulevard, past mom and pop shops, seafood restaurants, and colorful murals to our final stop – the San Fernando Road Bike Path, a short walk from the Bradley Avenue Plaza. The second phase of the path opened in late 2014, with lighting, striping, traffic sings, and landscaping. Future plans include a connection to the Burbank bicycle path system. The bikeway will anchor the southern end of the stretch of Van Nuys Boulevard destined for a Great Streets initiative makeover in the near future. 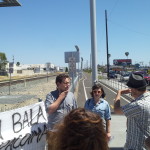 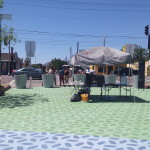 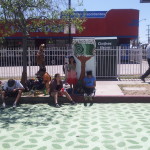 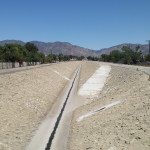 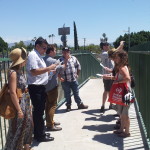 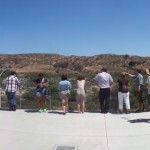 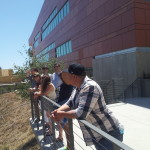 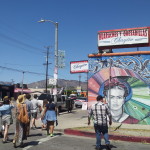 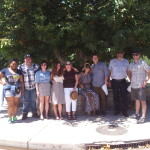 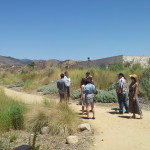 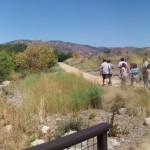