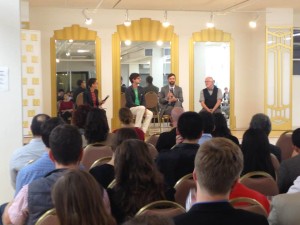 On October 14, APA LA hosted more than 80 guests at Maker City LA for “Planning for the Sharing Economy,” a panel event that used the lens of urban planning to focus a forward–thinking conversation on transportation network companies, short-term rentals, co-working spaces and more among academics, policymakers, and practitioners.

Technology is fundamentally changing the way we live, work, and use space. Cities have always facilitated the sharing of space, infrastructure, and culture, but our newfound connectivity is elevating the “sharing economy” to a level with impacts for land use and transportation planning, economic development, and sustainability. As these new models test current practices, outdated rules, and vested interests, planners and policymakers are challenged to capture their positive and negative effects.

See photos from the event and download audio of the panels below.

Robert Egger is the Founder and President of L.A. Kitchen, which recovers fresh fruits and vegetables to fuel a culinary arts job training program for men and women coming out of foster care and older men and women returning from incarceration. L.A. Kitchen is currently holding a pilot program at St. Vincent Meals on Wheels, and will move into its own kitchen facility in 2015. Robert pioneered this model during his 24 year tenure as the President of the DC Central Kitchen, the country’s first “community kitchen,” where food donated by hospitality businesses and farms is used to fuel a nationally recognized culinary arts job training program. In addition, Robert is the Founder and President of CForward, an advocacy organization that rallies employees of nonprofits to educate candidates about the economic role that nonprofits play in every community. In Washington D.C., Robert was the founding Chair of both the Mayor’s Commission on Nutrition and Street Sense, Washington’s “homeless” newspaper.

Paavo Monkkonen is Assistant Professor of Urban Planning at the UCLA Luskin School of Public Affairs, where he teaches courses on housing markets and policy, applied microeconomics, research methods, and urban segregation. His research focuses on housing policy with an emphasis on low-income housing, the changing spatial structures of cities, land use regulations and their impacts on housing markets, the regularization of informally developed neighborhoods, and property taxation, and is international in scope, having covered Argentina, Brazil, China, Hong Kong, India, Indonesia, Mexico, and the United States. In recent years, Dr. Monkkonen has received research funding from the John D. and Catherine T. MacArthur Foundation, the Regional Studies Association, the Lincoln Institute of Land Policy, the Global Development Network, the Inter-American Development Bank, and the University Grants Council of Hong Kong. He was previously an Assistant Professor at the University of Hong Kong.

Mark Vallianatos is Policy Director of the Urban & Environmental Policy Institute and adjunct professor of Urban & Environmental Policy at Occidental College. He works on issues of land use, transportation, food and climate change.  Mark is the co-author of The Next Los Angeles: the struggle for a livable city and wrote chapters on sidewalk vending in the books The Informal American City and Incomplete Streets. Mark serves on the City of Los Angeles’ Zoning Advisory Committee and on the steering committees of Los Angeles Walks, CICLE, and the Los Angeles Street Vendor Campaign.

Christine Outram is a design-driven, award winning, technology nerd who loves to build physical products and digital services that connect people and place. Prior to leading the Invention Group at Deutsch LA, she was working with Re:Imagine Group helping governments and NGO’s, including the City of Singapore, and the United Nations, harness big data and prototype the change they want to see in cities. She was also a Research Associate at MIT, where she led the design and development of the Copenhagen Wheel, a patented, sensor-enabled electric bike that won a James Dyson industrial design award and earned her a place on Postscapes “Top 100 Internet of Things Thinkers.” Christine received her SMArchS degree at MIT and her Architecture degree in Sydney, Australia.

Eric Spiegelman is the President of the Los Angeles Board of Taxicab Commissioners, which was recently asked by the Mayor to bring the City’s taxi regulations into the 21st century. He was born and raised in Los Angeles.

Brian Taylor is a professor of urban planning, Director of the Lewis Center for Regional Policy Studies, and Director of the Institute of Transportation Studies at UCLA’s Luskin School of Public Affairs. His research centers on transportation policy and planning, exploring how society pays for transportation systems and how these systems in turn serve the needs of people who – because of low income, disability, location, or age – have lower levels of mobility.  Topically, his research examines travel behavior, transportation finance, and politics & planning. Prior to joining the UCLA faculty in 1994, Professor Taylor taught planning at the University of North Carolina at Chapel Hill, and before that he was a planner with Metropolitan Transportation Commission in the San Francisco Bay Area.  Professor Taylor is currently Chair of a Transportation Research Board (of the National Academies) Special Report committee examining the public policy implications of new shared mobility systems in general, and transportation network companies in particular.  He was recently selected to be a planning program reviewer for the Planning Accreditation Board, and a Fellow in the American Institute of Certified Planners.

Rick Cole oversees 10 departments and responsible for city budgets of more than $7 billion as Deputy Mayor for Budget and Innovations for Los Angeles Mayor Eric Garcetti. For fifteen years, he was a city manager in two Southern California cities, Ventura and Azusa, recognized as one of America’s Public Officials of the Year by Governing Magazine and winning awards for municipal management excellence from the American Society of Public Administrators and the Municipal Management Association of Southern California. He served 12 years on the Pasadena City Council and was Mayor when Pasadena adopted their landmark General Plan, an early model for smart growth. Called “one of Southern California’s most visionary planning thinkers” by the Los Angeles Times, he has been an active leader in the International City Managers Association and the City Managers Department of the League of California Cities.

Paula Daniels is Senior Fellow on Food Systems, Water and Climate at the Office of Governor Jerry Brown.  She is also the Founder and Chair Emeritus of the LA Food Policy Council, a collective impact initiative that is advancing innovative policy initiatives and programs designed to increase the production and availability of food that is healthy, affordable, and grown locally, sustainably, and fairly.  She specializes in food and water policy and has had academic appointments at UC Berkeley and UCLA.  She was a Senior Advisor to Mayor Villaraigosa of Los Angeles and a Los Angeles Public Works Commissioner, where she led the development of a suite of green infrastructure policies, best practices and tools, and a food policy framework.  An attorney actively engaged in California environmental policy issues for over 20 years, Paula was also commissioner with the California Coastal Commission, and a gubernatorial appointee on the governing board of the California Bay-Delta Authority.

DW Ferrell is a civic innovator and founder of Localism Inc., and benefit-corp (B-corp), and a founding member at the WE Labs co-working community in Long Beach. Localism campaigns for local-first initiatives and offers a platform and incentives to districts and cities for measurable impact. DW has a background as a professor and entrepreneur in tech and design, and 20 years of experience within the retail, entertainment, and cause marketing fields. He is an outspoken advocate for building companies that value both purpose and profit for sustainable growth. Mr. Ferrell uses his background in design for placemaking projects, and web apps that promoted a connected community.

Claire Bowin is an escapee from the motion picture industry and currently a Senior City Planner with the City of Los Angeles Department of City Planning. Claire shifted her focus a decade ago from the cinematic virtual world to the world of reality where yes, things take a lot longer but are infinitely more interesting.

James Brasuell is a writer and editor, producing web and print content on the subjects of urbanism, architecture, and planning. James manages all editorial content and direction for Planetizen, the popular urban planning-based news and information website founded in 2000. Prior to joining Planetizen, James worked at the Cal Poly Pomona College of Environmental Design, as editor at Curbed LA, editor of The Planning Report, and as a freelance contributor for the The Architect’s Newspaper, the Urban Land Institute – Los Angeles Chapter, FORM, KCET, and the California Planning & Development Report.