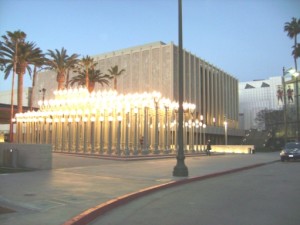 National Art Appreciation Month L.A. focuses our attention this August on great local public art and public places, and the popularity of Chris Burden’s “Urban Light,” at the forecourt of the Los Angeles County Museum of Art (LACMA) makes it ripe for both appreciation and dissection.

In the six years since its 2008 installation, Burden’s assemblage sculpture of vintage lampposts has transformed both the LACMA entrance and Wilshire Boulevard streetscape into one of L.A.’s most notable public space and public art success stories.  It can be seen blocks away, especially at dusk when the lights are on, and is a popular locale for locals and tourists alike, not to mention film crews.

Without doubt, economic investment in public art and public space development can be substantial, and urban planners are naturally at the core of these efforts.  “Urban Light” illustrates a few key “success” factors to consider as you visit it or other public art installations this month. 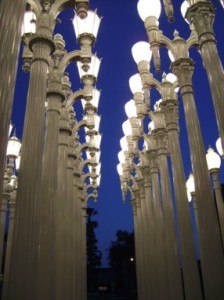 Positive and negative reactions to public art usually focus on the artwork’s meaning or message, its physical form, and the location/siting “fit.”  Although an artwork’s meaning or message can be subjective, the public usually agrees about the general impression it makes (bold, playful, sacred, etc.).  If “Urban Light” has any meaning, it seems both familiar and relevant – the glowing historic lampposts from a bygone L.A. era convey a sense of baroque frivolity and historic neighborhood intimacy, both of which we enjoyed.  Public art that confuses, confounds, distresses, or confronts the public instead cripples any enjoyment from the outset. 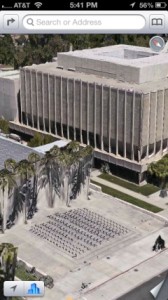 It’s clear that the sculpture’s classical forms and rectilinear layout, enhanced by evening lighting, is enjoyable from two distinct perspectives.  The sculpture advertises itself from a distance and draws the observer into a perceptually engaging interior space.  From within, its enclosing form is fascinating; from without, its form has become undeniably iconic – notably, it served as the most popular example of Apple Maps’ 2013 visual technology glitch (see photo at right).

Chris Burden Saw It Too

“I’ve been driving by these buildings for 40 years, and it’s always bugged me how this institution turned its back on the city.”  – Chris Burden

There is genius in how “Urban Light” conveys familiar and relevant meaning, exhibits a perspective-engaging form, and both uses and enhances its resident public space.  Supporting such genius requires an urban planner’s wisdom and guidance in making context-sensitive siting decisions that recognize the interdependence of artwork and public space.  The plaza had been empty for decades, but its Wilshire Boulevard exposure and its proximity to LACMA’s main entrance gave it great potential.  Although L.A. Times architecture critic Christopher Hawthorne feared that too much plaza space would be lost in installing such a large piece, it’s clear the sculpture doesn’t reduce the space – it enlivens it. 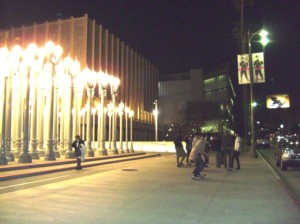 If “Urban Light” was chiefly designed to enliven an otherwise dead plaza space and present the public realm with an engaging image, then it must be an undeniable success.  If “Urban Light” was instead chosen to highlight and preview the entrance to LACMA, then its success is mixed:  “Urban Light” dominates the entire area and therefore further camouflages the already-obscured LACMA entrance.  In short, “Urban Light” is too exceptional as public art in and of itself to function as front man or sign post.  Hopefully LACMA’s proposed redesign of its east campus by Pritzker Prize-winning architect Peter Zumthor will take this into consideration.

When do the lights turn on and off?

The lights are solar-powered, on at dusk and off at dawn, so pub-crawlers looking for very late night amusement shouldn’t be disappointed.

How many lampposts are there?

The official report is that there are 202 vintage street light standards in Burden’s piece.  Some reports, however, put it at only 200.

Is there parking nearby?

Street parking on Wilshire Blvd. and surrounding streets is available, but parking directly in front of LACMA’s plaza area is restricted.  There are two LACMA parking lots (6th St. east of Fairfax, and at the corner of Wilshire Blvd. and Spaulding); $12, free after 7 p.m.

Can I take photos?

Photos can be freely taken of any public art.  Photos of “Urban Light” can be publicly shared on Google Maps: Public Art “Urban Light.”

Can I write a public review of “Urban Light”?

K. M. Williamson, Ph. D. is an applied social ecologist and founding director of Public Art in Public Places Project.  She holds a doctorate from the School of Social Ecology, UC Irvine, has been an APA member for 15 years, and currently serves as planning commissioner for the City of Claremont.