Summer in the City: Inglewood

On June 21, the City of Inglewood hosted APA Los Angeles members and their guests for the first Summer in the City event of 2014.  We were greeted by the Mayor of Inglewood, James T. Butts, Jr. After brief remarks from Mayor Butts, we boarded a bus and were off to our first stop of the tour.

Stop One: The Fabulous Forum 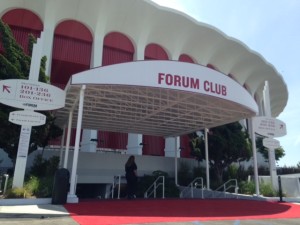 On our private tour of the Forum, we saw the arena being set up for an event that evening while Madison Square Garden, LLC representatives went into detail about their expenditure of  nearly $100 million renovating the 45-year-old facility to create a unique experience for visitors. The renovation included installation of a new roof structure composed of more than 200,000 pounds of steel, 600 LED lights, and 10,000 feet of tension wire, able to hold 10,000 pounds of equipment for lighting, video and other stage effects. Other facility enhancements include additional restrooms, new seating, new concession areas and wider concourses. The arena has been outfitted with dividers that close off the upper-tier rows to create a more intimate venue for smaller events. The Forum has also qualified for listing on the National Register of Historic Places. The tour included exclusive backstage access where we checked out dressing rooms, the private gym, game room, and other areas usually only seen by performers like Sting and his entourage.

Inglewood staff discussed how the City’s 1% Art in Public Places program was used to upgrade the perimeter of the property, which is used by the community as a walking/jogging and exercise track. Upgrades included enhanced landscaping, parklets, lighted benches, and a mural on the façade of the Forum.  Staff also explained the community benefits provided through the development agreement for the project which included use of the facility for community events such as a farmer’s market. 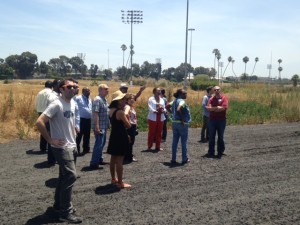 Opened in 1938 by the Hollywood Turf Club, and operating until the end of 2013, Hollywood Park was a thoroughbred horse racing track.  According to the Hollywood Park construction manager who guided our tour, in its heyday the 238-acre facility was home to approxima
tely 2,000 horses and their groomers and trainers, who were year-round residents in apartments near the stables. The property has a history of biodiversity including coyotes and other wildlife as well as flamingos that populated the lake in the center of the track. After a tour of the stables and the practice track, we took a ride around the famous Hollywood Park racetrack for a track-level view of the grandstand and casino (which is still open).

Demolition and dismantling of the grandstand and pavilion will begin in the coming months to make way for Hollywood Park Tomorrow. The project is described as “construction of a new mixed-use development containing up to 2,995 dwelling units, 620,000 square-feet of retail space, 75,000 square-feet of office/commercial space, a 300-room hotel, 10,000 square-feet of community serving uses, and a 25-acre park system with passive and active recreational opportunities.” The existing casino has been approved for demolition and reconstruction at a new location on the site adjacent to Century Boulevard. 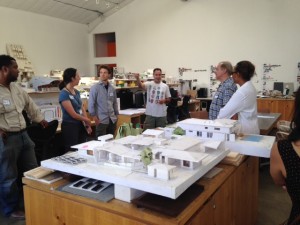 Our last stop was a visit to an enclave of artist live/work studios and creative office space. Our host for this tour was the owner of Form Environment Research (Fer) Studio, architects of Connie & Teds in West Hollywood among other projects.  (Fer) Studio is located in an industrial setting that has been transformed into a creative office environment. Inglewood’s thriving artist community comes together most notably the second weekend in November to host Inglewood Open Studios – a tour of artists’ studios throughout the City.