Summer in the City: Santa Monica

On August 21, the City of Santa Monica’s Planning and Community Development Department hosted APA LA members and their guests for the third Summer in the City event of 2014.  Upon arrival at City Hall, we were greeted by Senior Planner Liz Bar-El and staff including Francie Stefan, Colleen Stoll, Lind Huynh, Jason Kligier and Michelle Glickert to kick off our exploration the latest in innovative planning for downtown Santa Monica. 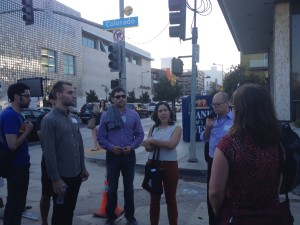 At the corner of 4th and Colorado Streets, the group was shown the site of the future Expo Line station that will provide a transit connection from Santa Monica to downtown Los Angeles. Liz Bar-El gave a presentation on the many public works projects that have been planned to complement the Expo Line and transform the surrounding area into a multi-modal hub.  The Expo Line itself is a $1.4 billion transit investment and is projected to serve 64,000 riders daily.  This is being supplemented by $7 million in improvements to better integrate Bergamot Station into the area.  There will be three stations within the City of Santa Monica: Bergamot, Santa Monica College and Downtown.

The City of Santa Monica knows that there will always be drivers, but emphasizes that drivers have choices. If 10% of current drivers choose modes of transportation other than driving, then the City will achieve its goal of “no net new PM peak trips.” The City hopes to achieve this goal by changing circulation patterns, creating more transit, and having more transit oriented development around transit hubs. To that end, the station at Santa Monica City College will connect to the Expo Bike Path terminus and be near the 17th Street bike facility so that people can connect their last or first mile by biking or walking. 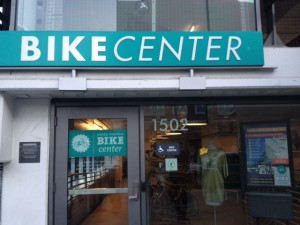 Continuing the transportation theme, the next stop was at the Santa Monica Bike Center, which not only rents bikes, but also loans them to commuters for a two-week trial free of charge.  Participants in the loaner bike program are also given helmets, panniers, racks, U-locks, route planning and guidance on the rules of the road. The Bike Center also provides bike maintenance and repair services during the week between 10 AM and 6 PM.  The Bike Center serves as an asset to the Santa Monica biking community, helping riders feels more comfortable on the road and providing a place to park bikes while exploring the downtown area.

In contrast to the Bike Center, the next stop was a parking structure.  But Parking Structure 6 is a beautiful modernist building with a lovely view, so we climbed up the stairs to the top level and looked out at the setting sun over the Pacific Ocean.  And although the parking structure holds space for up to 744 cars, it also has space for 30 EV charging stations and 72 bikes, showcasing that parking structures can be designed to accommodate changing transportation preferences. 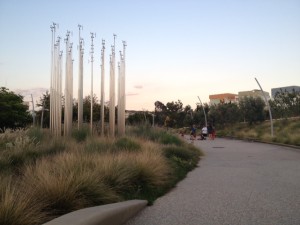 After checking out the ocean view and getting some exercise from the stairs to the top of Parking Structure 6, we checked out downtown’s newest green jewel, Tongva Park.  Less than a year old, Tongva Park still sparkles at sunset and has quickly become a community destination and landmark. The community engagement process resulted in a park that provides opportunities for strolling, views and a children’s playground in a naturalistic setting. Although it is close to bustling downtown Santa Monica, the park feels like a tranquil respite with its meandering paths, drought resistant landscaping and a water feature running along the foot path.  FFP, the project architect, designed the park’s comfort station as a grotto embedded in a rolling landscape. The bathrooms are single stall – good for families with kids. Designer James Corner Field Operations also designed New York City’s High Line, so there are hints of the High Line at Tongva.

Another highlight at the park included a visit from Santa Monica Mayor Pam O’Connor. Mayor O’Connor has been an advocate for multi-modal transportation and sustainability while also nurturing the growth of the local tech community in “Silicon Beach.”

Last Stop: Loew’s Hotel and a Twilight Concert on the Pier 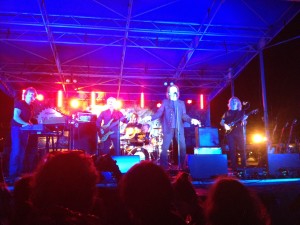 Since dusk was approaching, the group left the park to continue spirited planning conversations over drinks at the Loew’s Hotel overlooking the ocean.  And when the drinks kicked in, we headed over to the Santa Monica Pier, long a draw for Santa Monica residents and visitors, for a free outdoor concert by The Zombies.  The APA group was treated by the City to VIP access and shimmied in the summer night to their 1968 hit, “Time of the Season.” Like the band, the City of Santa Monica has consistently delivered over the years to its fans.

Thanks again to the City of Santa Monica for hosting this event and leading us on an informative tour. We hope that you will join us for the final Summer in The City 2014 event in Glendale this Saturday, September 20.