What if the Los Angeles City Council had followed through with a proposal to build a convention center in Elysian Park, as it planned to in 1965? Andrea Thabet, Ph.D. of RemakingLA.com explores the importance of studying “never built” projects. 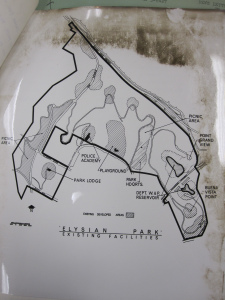 What if the LA City Council had followed through with a plan to build a convention center in Elysian Park? What would the park look like today? How would it have affected traffic, especially during baseball season? And what about the park’s nearby residents? These are only a few of the questions that came to mind when I discovered that in March 1965, the LA City Council approved a proposal to build a convention center in Elysian Park. Perhaps the most perplexing aspect of the plan was the choice to construct it on 63 acres of the park’s most popular valley and picnic grounds near the Avenue of the Palms, which included the old Recreation Lodge. Even worse, this plan came less than a year after the California state legislature allocated nearly $4.2 million to LA County for acquisition and improvement of public parks, under the 1964 California Park Bond Act. As a result, the City Council’s Recreation and Parks Committee formulated a strategy for creating new parks and improving older ones, a necessity in a park poor city with a rapidly increasing population.1

The Elysian Park convention center proposal would have been an interesting candidate for the A+D Museum’s 2013 “Never Built: Los Angeles” Exhibition, which explored the ‘what ifs’ of failed plans and asked Angelenos to ‘dream big’ again. Admittedly, the Never Built show included many visionary, grand plans that “had the greatest potential” to transform land use and the built environment of Los Angeles. Perhaps that is why the Elysian Park convention center did not make the cut — it was a modest design with very little in the way of architectural innovation. Yet, a convention center in Elysian Park would have made a stunning impact on LA’s built environment, with two possible results: if the project followed through with promised upgrades to the park’s design and facilities, Elysian Park might have become more widely used by the greater LA population, much in the same way as Griffith Park. More than likely, however, is that the destruction to Elysian park’s landscaped picnic areas and the increased traffic would have had a detrimental effect on park users and nearby neighbors.

Further, any future expansion of the convention center would have continued to erode parklands and cause further traffic and park usage problems. And what would have become of the land where the convention center now sits? Might it have been a football stadium? Would Staples Center and LA Live exist had the convention center been built elsewhere? Studying a city’s ‘never built’ plans can offer urban planners a history lesson in land use, and remind us that studying what doesn’t get built is often just as illuminating as studying the projects that have succeeded. 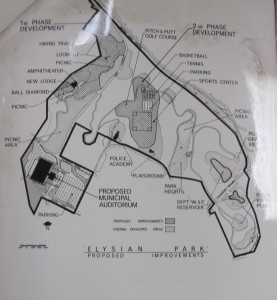 In the case of Elysian Park, the effort to build a convention center there failed mainly because retired journalist Grace E. Simons founded the Citizens Committee to Save Elysian Park in 1965, and launched a well-organized and inventive campaign to block the plans, a story I recently alluded to in a blog post about Dodger Stadium. Throughout the 18-month battle, Simons and the Committee reminded elected officials that the convention center proposal violated the park’s protection under the 1925 LA City Charter, which stated all dedicated park land must “forever remain” for “use of the public inviolate; but permission may be given for any park purpose.”2 Because events and exhibits at the convention center would be private and restricted, the proposal violated the Charter provisions that park land be reserved for park use and public use. The Committee argued that ignoring the Charter not only violated the public’s trust, but also “set a precedent which would endanger all public parks in Los Angeles.” Simons found it simply unacceptable that the Council viewed park space as “merely … [land] ‘in storage’ to be used for other purposes at the whim of … city officials.”3

In a speech to the City Council, Simons remarked that the park’s users were community groups and families who “do not own estates of their own, who cannot luxuriate in private swimming pools and who cannot afford to send their children to summer camps.” Where, she asked the Council, will youngsters go when the park is taken away from them; they “do not have chauffeur-driven cars to take them to the hills and the spas. Elysian Park is their playground.”4 One resident wrote to the Council that with the recent “population explosion,” the city needs “recreation centers with…efficient, trained leaders … to keep our children, especially those who do not have large yards … off the streets, [and] out of mischief.” Elysian Park, she noted, was “adjacent to a poorer section of the town where more often space and playgrounds are a vital necessity.”5 One man recalled observing the generations of nearby families that used the park as “the backyard they didn’t have.”6 These letters to the City Council certainly capture why the park was so important to the neighboring communities of Echo Park, Boyle Heights, Lincoln Heights, and Elysian Heights—residents in these neighborhoods were typically working class families with small homes and relatively little disposable income to spend on leisure.7 Simons and the Committee, in fact, spent several weeks researching and analyzing a year’s worth of Recreation Lodge permits, and applying anthropological methods of observation to get a true sense of who used Elysian Park.8 As longtime residents of the Elysian Park neighborhood, Simons and other Committee members clearly understood what the park meant to the local community, and they made sure the Council members controlling the park’s fate did too.

The story of the Elysian Park convention center controversy underscores the importance of studying the habits and needs of the people most directly affected by urban planning. Simons and the Committee convinced the Council to ultimately reject the convention center plan, in part, because they were able to prove it would detrimentally affect the quality of life for the park’s neighbors and users, who were already suffering from increased traffic and noise since Dodger Stadium’s arrival in Chavez Ravine.

The Committee also succeeded, in part, because they operated within a national turn toward renewed interest in conservation, park preservation, and urban beautification. A slew of municipal, state, and national legislation passed during the 1960s indicated broader shifts taking place in the public lexicon about development and policy priorities. These policy shifts revealed the beginnings of an environmentalist perspective as distinct from mere conservation of resources and preservation of wilderness—and foreshadowed the power of its political presence. While the Citizens Committee saw the Elysian Park struggle as a preservation issue, and used the language of preservation and conservation throughout its campaign, the Committee was already making connections between the burgeoning environmental movement and concerns over urban renewal and the loss of green spaces. Their efforts would help pave the path for future interventions in urban renewal projects that might negatively impact open spaces and urban greenery in Los Angeles.

Recently, Elysian Park’s aesthetics have been threatened by a proposal to sell off park-adjacent land owned by Barlow Respiratory Hospital, a private hospital sitting on twenty-five acres at the park’s southwestern edge, close to the Avenue of the Palms. Built nearly a century ago, the hospital desperately needs to replace existing facilities as they are beyond upgrading to meet legal seismic requirements. However, the hospital cannot afford the cost of new construction, and has proposed to finance it through the sale of nineteen unused acres to a private developer. Not only would it require zoning and land-use changes, the sale would also threaten the park’s aesthetics and quality of life for nearby residents of Echo Park, Silver Lake, and Elysian Valley. According to the Los Angeles Times, development plans include the construction of high-density housing without adequate parking spaces. Barlow’s CEO states that rebuilding plans will take into account the needs of the community to enhance the neighborhood, offer valuable services, and provide limited job creation. However, new development would increase traffic and parking congestion in the area surrounding Elysian Park’s most popular grounds. A group of local citizens has organized a protest campaign that is clearly modeled on the strategies employed by Simons and CCSEP in 1965.9

Dr. Andrea Thabet has a Ph.D. in US history from UC Santa Barbara, with a focus on twentieth century history, urban history, Los Angeles history, and public history. She is currently revising her dissertation for publication. Titled “Culture as Urban Renewal: Postwar Los Angeles and the Remaking of Public Space,” the manuscript looks at cultural initiatives and spaces of leisure as a way to understand the larger social, economic, and political forces that shaped Los Angeles after World War II — specifically, the Hollywood Bowl, the LA Music Center, the LA County Museum of Art, and Elysian Park. She examines the construction and revitalization of these public spaces as a way to understand not only the significance of constructing cultural spaces in the project to remake LA into a national cultural epicenter, but also what that story reveals about urban growth and urban renewal policy in Los Angeles after World War II.